Monorails are good for going over traffic jams. They are futuristic and some have toilets. You can also see a better view on one. People love monorails, they are good transportation. Monorails look like a missile flying over the tracks. They cost less and they’re easy to build. They run on smooth guideways and are very quiet. They are up in the air so cars can’t hit them.

One monorail that is a van and a monorail is called a RUF monorail (Rapid Urban Flexible) monorail. The RUF cars ride on the street and on monorail tracks. They look something like this, 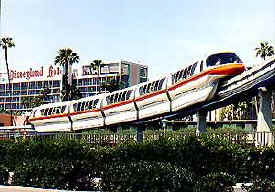 The Alweg Monorail is the most famous monorail of all. One was in Disneyland. It was built in 1959. It went from Disneyland to the Disneyland Hotel. The first Alweg was a tilting monorail.

Walt Disney saw it in Germany when he was on vacation. Walt got the idea of building the Disneyland monorail from that.

Monorail trains run on one rail. Mark V monorails have excellent views. "Mono" means "one." These trains run on electricity. There are two main kinds of monorails. This monorail (see picture #1) train is balanced on top of the rail. It’s built on top of towers high above the ground. This Monorail (See Picture #2) hangs below the rail. Many airports and amusement parks have them. 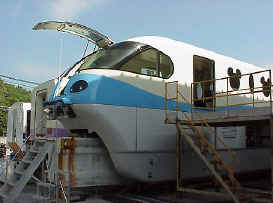 The tracks of a monorail are made out of concrete. The wheels are made of rubber. The wheels are in the middle and not on the sides. It looks like the monorail is eating the track. It’s less noisy and stops better than a regular train. They don’t take up much space. And cars can drive under them.

The funniest railway was the Cheshunt railway built on June 25th, 1825. It was a hanging monorail pulled by a horse. (Maybe that’s what they mean by a one horsepower engine.) One of the oldest monorails is the Wuppertal Schwebebahn in Cologne, Germany. Schwebebahn means "swing railway." It’s still running today after surviving two world wars. One of my favorite monorails is the Bennie Railplane. It looks like a giant missile hanging from the tracks. It was built in Glasgow, Scotland. And has a cruise speed of 160 kilometers (per hour.) 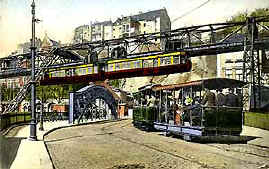 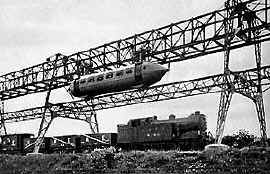 (The Wuppertal Schwebebahn) (The Bennie Railplane)

The monorail starts with 20 passengers.

The distance between the stations is two miles.

The people that get off are five per station.

The train leaves at 6 AM.

When does the last person get off?

The last passenger gets off at 7:20 AM. Because it takes 20 minutes for each station. There are enough passengers for four stations. Four times 20 is 80 minutes. 80 minutes after 6 AM is 7:20 AM.