I'm restoring a United Avalon bowling machine - built in 1962, like your webmaster.

It's been a while since this thing worked - 24 years, to be precise.  Richard J. Daley was in office when this thing was making money.  Ambrose and Candy had it in their basement for years, and ran an ad in the Wednesday Journal.  I went to see it, and it sort of started up, but didn't really work.  A beast, it's nine feet long and weighs at least 600 pounds.  At the time we were living on Ridgeland, and there was no room, so I took a pass. 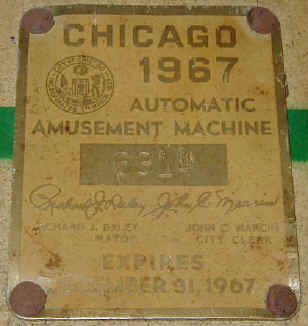 A year later, Kaye called me, and said that Candy had asked about me.  Seems I was the only one who responded to the ad.  Was I still interested?  I took another look, and told Ambrose that I didn't have a place for it, but maybe in the next house.  That the thing was worth, maybe, $6-700 if it worked, and it wouldn't take much to make it work.  If he just wanted to be rid of it, I'd give him a hundred, stuff it in the garage, and wait.  Someday, but not now, I'd get it running, and I'd call him.

Ten minutes later, we were stuffing it in the Scorpio.  You can carry anything in a Scorpio.

Two years in that garage, and two more years in my basement, when I remembered that Chris (known as Uncle Funny Chris to my kids) had said something once.  He wished that someday he'd have enough free time to take the time to dive in and get the thing working.  So this year my employer declared a non-optional vacation at the holidays.  I called Chris up, and we got started.

As of March 2002, we'd cleaned everything, replaced the game select switch, and it turns over, but the main reset solenoid freezes when you reset it.  Still hunting.

December, 2002 - I found another strange machine on Ebay - Bowling machines were never as hip as their flippered counterparts, and their designs were somewhat stolid.  But check out United's "Civic Center" - themed on the Picasso in downtown Chicago! 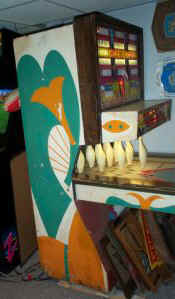